Select a filter to search the resources in the list.
Preacher: John Kennedy
Passage: Galatians 1:8-9

Hyper-Evangelism: Another Gospel, Though A Mighty Power 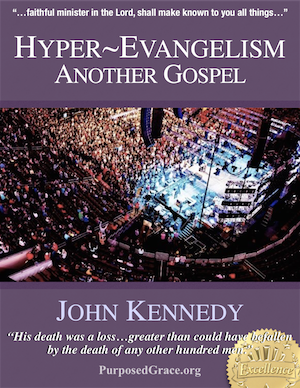 John Kennedy wrote... This omission is usually justified on the ground, that references to these are apt to be abused or to give needless offence. If men are to be told that salvation is entirely at the disposal of God's sovereign will, and that sinners are so utterly lost that only the working of God's power can move them either to will or to do what is required by the claims of the law and by the call of the gospel, then the result will be, that some will be offended and go away, others fold their hands and sleep, and others still sink down into despair. Am I therefore to refrain from proclaiming Jehovah as King? Am I to be silenced by fear of the result of telling that it is His right to regulate, by His own sovereign will, His own work of grace? Am I not rather very specially called to announce His sovereignty in connection with salvation? In no other sphere does he appear more gloriously kingly than in this. Did not the Divine preacher make the sovereignty of God the theme of His very first sermon, though His hearers were thereby so incensed, that only by a miracle could He preserve His life from their fury (LUKE 4)? And did He not, in all His preaching, ascribe salvation to the sovereign will of the Father who sent Him?

Men, anxious to secure a certain result, and determined to produce it, do not like to think of a controlling will, to whose sovereign behests they must submit, and of the necessity of almighty power being at work, whose action must be regulated by another will than theirs. Certain processes must lead to certain results. This selfish earnestness, this proud resolve to make a manageable business of conversion work, is intolerant of any recognition of the sovereignty of God. "Go to the street," said the great American evangelist to a group of young ladies who were seated before him, "and lay your hand on the shoulder of every drunkard you meet, and tell him that God loves him, and that Christ died for him; and if you do so, I see no reason why there should be an unconverted drunkard in Edinburgh for forty-eight hours...."

...The novelty of the "inquiry room" was another effective aid in advancing this movement. It is declared to be desirable to come into close personal contact with the hearers of the gospel immediately after a sermon, in order to ascertain their state of feeling, to deepen impressions that may have been made, and to give a helping hand to the anxious. Such is the plea for "the inquiry room." In order that it may be supplied, hearers are strongly urged, after a sensational address, to take the position of converts or inquirers. They are pressed and hurried to a public confession. Strange means are resorted to, in order to commit them, by an open avowal of a certain state of feeling. But what right has any individual, not authorized by the Church of Christ, to do so,—to insist on a public confession on the part of anyone? Even the Church can admit to public confession only after trial. And the admission must be in connection with the dispensation of the appointed sealing ordinances. But here is a stranger, who never saw their faces before, hurrying people, whom a sensational address has excited, to make public profession of faith, thus associating them, without possibility of trial, with the Christians of the locality, and involving the credit of religion in their future conduct before the world. This, surely, is both unwise and presumptuous. How unlike this to the Divine Teacher's way!

Tags: Evangelism
Back to top